Many thanks to the children of St Brendan's Catholic Primary School, Corby for their brilliant donation of £161.72. They raised this money for Sports Relief. The money will help fund the Malaria Project in Penyem Village, The Gambia. The school was officially named as a Partnership School in the NTF Schools Twinning Programme with Penyem Nursery School. 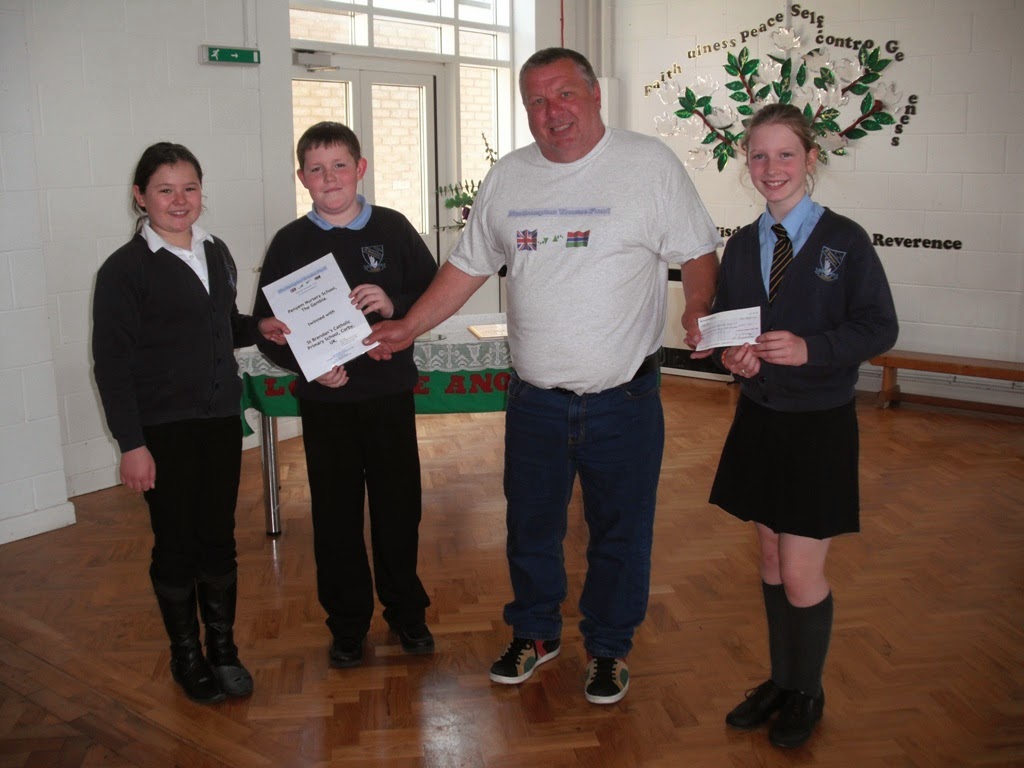 We are please to announce that full funding for projects in Penyem for the year 2014-2015 have been secured and sent to the village. The funding which is over £6000 covers all sponsored children, a new maintenance budget for the new village ambulance, supplement salaries for the teachers and funding for small projects.

Next trip booked for December 2014!

A group of 15 Adults will be heading off to The Gambia on Tuesday 9 December 2014! This follows the successful adult trip in December 2013. It seems as if it will become an annual event! The image here if for those requiring Health information for The Gambia. 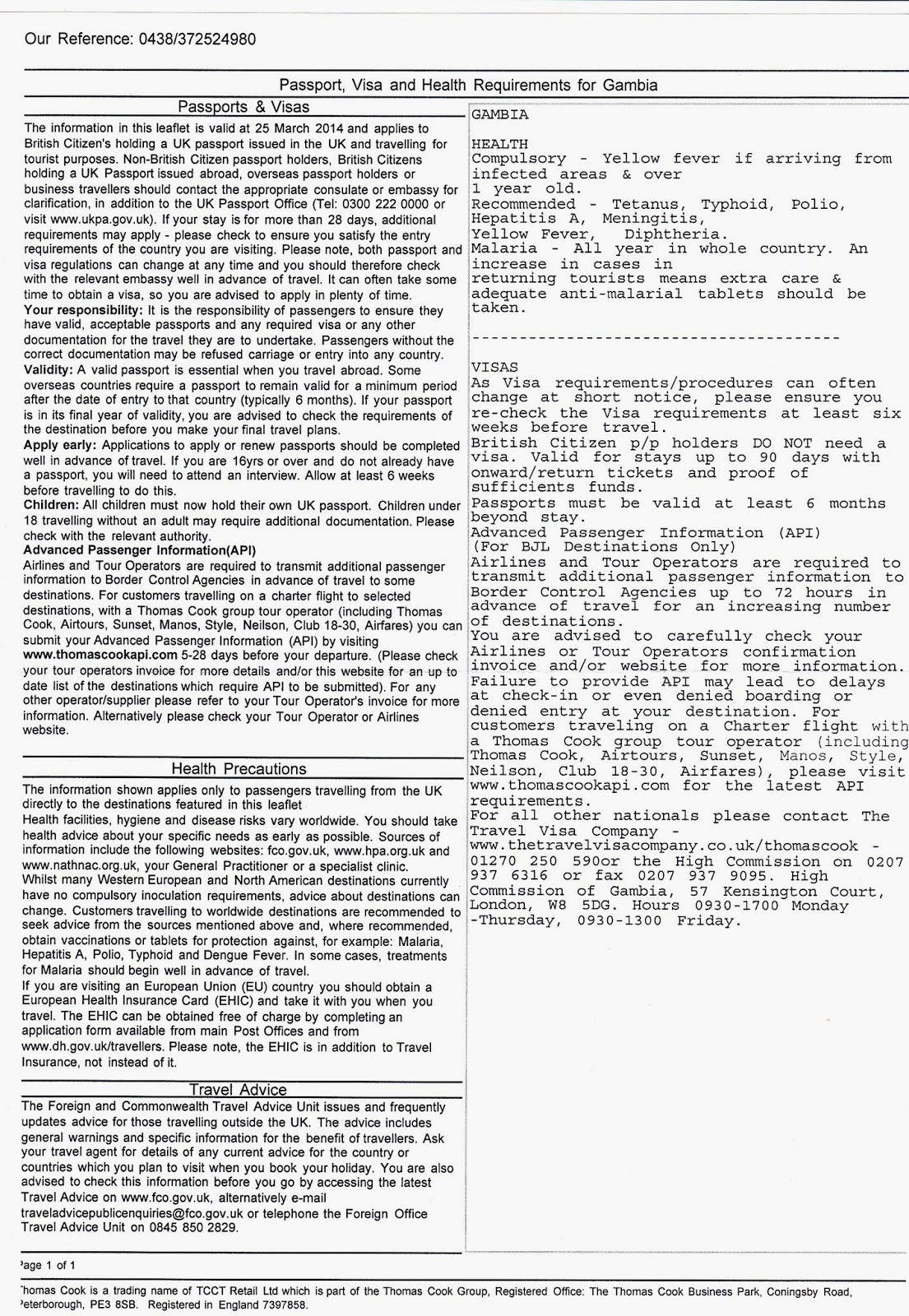 The Kingswood Secondary Academy, Corby made their annual visit to Penyem during February 2014. For a year they had been fundraising and getting involved in the 2014 mosquito net appeal. On January 1st 2014 we set a target for the year to fundraise to allow us to but 250 mosquito nets for the villagers. By the end of January we had raise enough money for 626 nets - a year's target in one month! We had also set a target for 2015 to fundraise to replace our old village community ambulance. In February 2014, with the help of £2500 donated by the Kingswood students, we were able to buy a replacement - two years of targets in 2 months!


We also were able to present the village with the funds to pay the doctor for another year courtesy of Imerja UK Ltd. Furthermore, we were able to give the second phased payment of £500 donated by DJB Labcare UK for the training of a nurse. Labcare also donated a reconditioned autoclave (medical steriliser) which has been top of the doctor's wish list for a number of years.

NTF would like to thank everyone for their amazing generosity.

Below is some key moments in the week!

We set a deadline for the donations for mosquito nets as 31 January 2014. This seems a strange thing to do as it was originally our project for the whole of 2014! Of course, we will not turn down further donations! Our target was to supply Penyem Village with 200 mosquito nets. It is now Wednesday 5 February 2014 and the total we are able to purchase is...............592................. WOW! Thanks to everyone who has contributed. We will be displaying a 'Tribute Wall' in the village Health Centre later this month.

Furthermore, our second phase of fundraising for 2015, was to replace our ageing Community Ambulance which we bought 10 years ago. Last week I received a donation from The Kingswood Secondary Academy, Corby of £2500! NTF has added a minimum of another £500 to this to make the funds available for a replacement vehicle £3000. Land Rovers or similar are difficult to find in The Gambia at this price and we are aware we may have to increase the funds. However, we hope to have a replacement vehicle by the end of March. Not bad - 2 years work done in 3 months!

I will be travelling to The Gambia on 18 February with a group from Kingswood. We will distribute mosquito nets - with any luck from a 'new' vehicle!

Lastly I pass on my thanks to Imerja UK and DJB Labcare who have renewed their sponsorship of the Health workers in Penyem Health Centre for 2014. 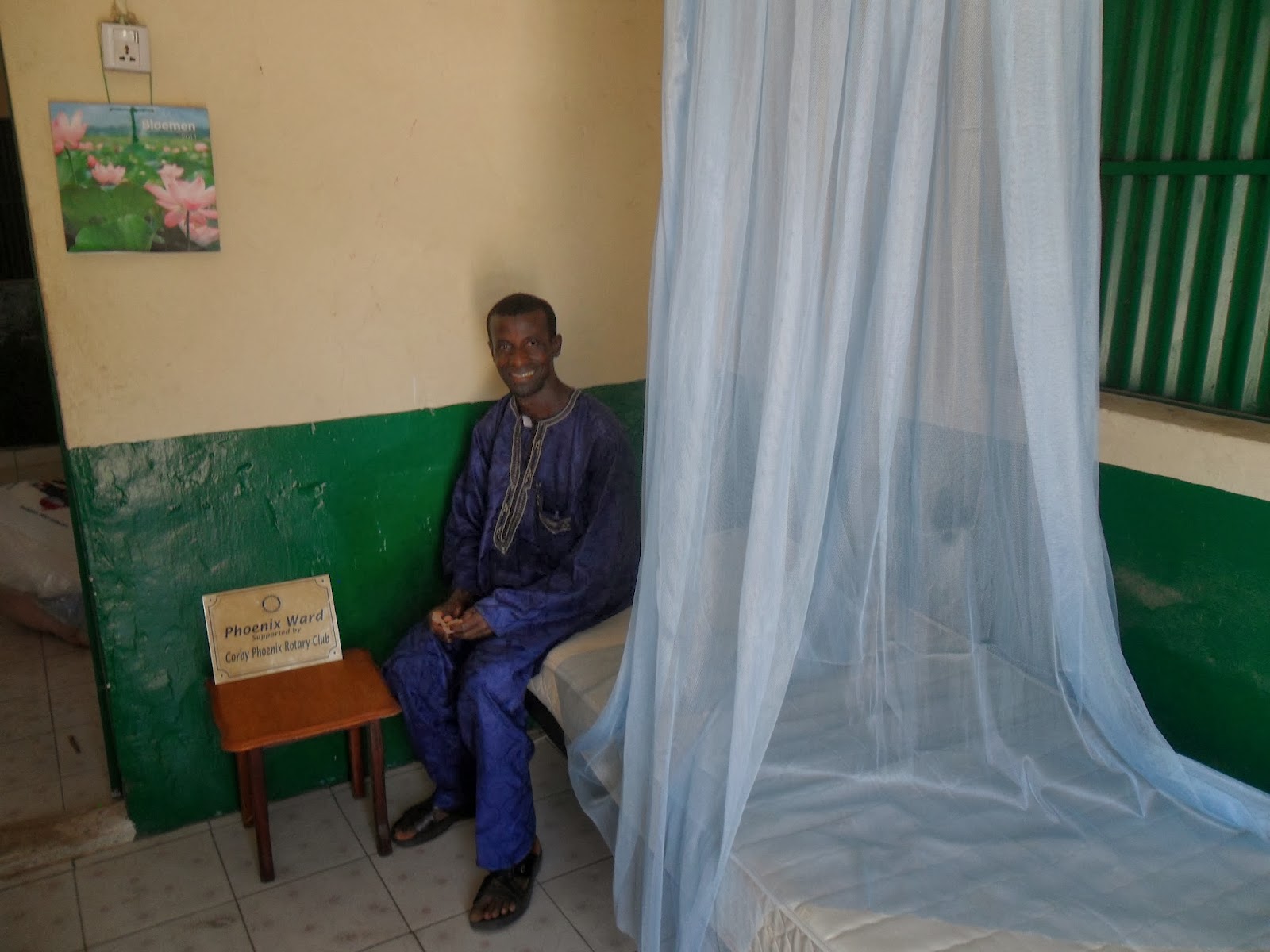 Friday 17 January. After only 2 weeks, the mosquito net appeal has reached 148 nets. This is a fantastic effort from all our supporters. We are confident of reaching our target of 200 nets by the end of January. We will personally deliver the nets to families in Penyem when we visit the village at the end of February. The picture here shows the Alkolo fo Penyem, Chief Kalilu Kolley with a mosquito net in the isolation ward of the health centre.

Welcome to all the new readers of this blog. Please take time to enjoy reading the other blogs listed below!

2014 with be the 10th anniversary of our charity - Northampton Trustee Fund.  We are setting out on our most ambitious fundraising venture to date - to fight off malaria in our village of Penyem in The Gambia. This will eventually involve major financial medical input in our health centre in the village. However to get things moving we are appealing for donations to buy mosquito nets. £5 will buy a net with your name on it! How can you help? - put a fiver in an envelope and send it to me at 11 Greenhills Close. Northampton. NN2 8EN ......BUT BEFORE YOU POST IT - get down the pub or wherever and make a collection from your friends - don't forget to include a list of names. A mosquito net will solve over 50% of the problems - ALL FOR A FIVER! Please share this with your friends. Thanks.